In 2016 it was announced that the UK’s Orenda Books had a 2 book deal with Norwegian author Kjell Ola Dahl.  Published  in 14 countries and winner of numerous prizes his books are popular around the world.  The Ice Swimmer (translated by Don Bartlett) is the second of these books and we were lucky to receive an advance copy to read and an extract to publish.

The story starts when a dead man is lifted from Oslo harbour and the tale reveals itself as the detectives do their work.  As in everyday life however, the personal affairs of the detectives’ own lives get in the way of certain aspects of the investigation.  In this case many of these personal aspects fall upon the shoulders of Detective Lena Stigersand.  As with lots of Nordic Noir we have been seeing on UK television recently The Ice Swimmer is tied up with politics and financial crime.  We read about parts of Oslo’s darker side while at the same time we are aware of Norwegian Christmas traditions as characters in the book prepare for the festive season. The city of Oslo also has a strong presence as the detectives move from between different parts of the city and the reader can get a good sense of the place.

The Ice Swimmer has positive similarities with the first book published by Orenda Faithless.  The tale is a police procedural with a touch of psychological thriller.  The tension builds steadily and Kjell Ola Dahl takes his readers the complex way round his imagination however the chapters are short making it easily manageable for bedtime readers.  Kjell has a great skill in balancing the story with getting to know his detectives deeply which I really like.

If you like what you read in the extract below I would encourage you to buy the book as well as come and hear Kjell speak at the Nordic Noir panel at Newcastle Noir on 5th of May alongside Thomas Enger a fellow Norwegian crime writer.  Enjoy the extract:

Nina threads her way through the stream of people pouring up the
steps at Egertorget Metro Station. She continues along Karl Johans
gate, where the heating cables under the flagstones keep the pavement
free of snow. She speeds up. The traffic lights change to red,
but Nina doesn’t stop. She glances over her shoulder and sets off at a
run. The exhaust fumes spreading across the open tarmac reflect the
lights of the morning rush-hour cars and creep up their bodywork.
In shop windows plastic Christmas pixies in woollen jumpers and
coarse fabric trousers stand and laugh. Others wear frozen smiles and
wave stiff arms. Nina races past, a shadow on the glass.
Nina runs down the steps of Jernbanetorget Metro Station.
A train roars in and screeches to a halt. The doors open. Passengers
disgorge onto the platform.
Nina hesitates. Waits. Looks around. The doors close. At the last
second she makes a lunge. A man does the same into the carriage
behind.
The train sets off. The temperature inside is warmer, but Nina is
frozen. The carriage jerks and lurches around the bends. Passengers
cling to the poles that connect the floor to the ceiling. Nina sits
facing backwards. Her eyes flit across the other people, all squeezed
close together, some staring at the ceiling, some with their noses in
a book or a newspaper. Nina continues to search. And makes eye
contact with her pursuer.
He is sitting right at the other end and raises his hand in a wave.
Nina jumps up. She works her way forwards. The train is packed
and she hides behind backs as she moves towards the door. The train
stops at Grønland.
The doors open.
Nina waits and gets off just as the doors close.
The train pulls away.
Nina is left standing on the platform. She doesn’t move, as though
afraid to look, afraid to know the result of her sudden manoeuvre.
Finally she turns. She sees her pursuer standing a few metres away.
They stare into each other’s eyes for several long, mute seconds.
Nina is on the point of saying something. The words are drowned
by the noise of another train braking and coming to a halt alongside
the platform. The man can read her fear.
The doors open, passengers spew out and a few get on.
The two of them are motionless. Only Nina’s eyes roam.
The doors close.
Nina flings herself in.
In some miraculous way the pursuer manages to follow suit before
the doors are closed.
The train moves off. Nina advances through the carriage, pushing
people aside. She is at the front now. Soon she won’t be able to go any
further. Slowly she turns and meets her pursuer’s eyes. She is standing
like this when the train arrives in the next station. The doors open.
Nina waits. The doors are about to close.
Nina makes a lunge at the last instant.
Nina walks slowly, glancing to each side.
As the train picks up speed, she looks around. Sees only passengers,
no sign of her pursuer. The crowd on the platform is thinning.
Then she sees him. She has walked past him. The man starts
walking. Towards her.
Nina backs away, down the platform. They are alone now. Nina is
forced against the wall. But there is a gap in the wall.
She spins round and jumps down onto the tracks. She runs into
the tunnel. Soon she has merged into the blackness. 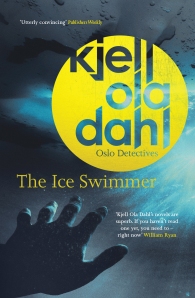 check out what other readers think !