*Giveaway* Where Roses Never Die – An addiction to crime fiction

Are you the kind of reader who gets addicted to a series of books?  I was addicted to Ian Rankin’s Rebus books.  I so looked forward to the next book coming out, wondered what music Rebus would be listening to,  where his work would take him, if he had changed his SAAB, how much he may be drinking and if he had a woman in his life yet.  So many practical factors come into play for a reader to fall into this state; practically the publisher must be publishing the books regularly, they must be affordable, easily available and emotionally  the reader has to feel something for the character, the stories need to keep you interested and be enjoyable.  It may help if there is supporting material to feed your habit between books such as a TV series or regular appearances or interviews by the author that you can engage in.

My addiction to Rebus ended around 9 years ago, mainly thanks to Ian Rankin rather than a twelve step programme and I was left floundering. Who would take his place?  Now I am starting to wonder if perhaps it might be PI Varg Veum. I have come to meet him rather late in his detecting career but this gives me the delicious knowledge that he has a back catalogue I can savour.  To address the crime addict’s practical needs the books are being published regularly by Orenda books as affordable paperbacks and are well translated.  Emotionally I like hanging out with Varg Veum between the pages.  He is complex and and unpredictable, gets interesting cases, moves about locations which appeals to me, likes music and at this early stage in our relationship even his drinking habit does not seem to be a problem.  (although I may be developing a desire to taste Norwegian Aquavit). 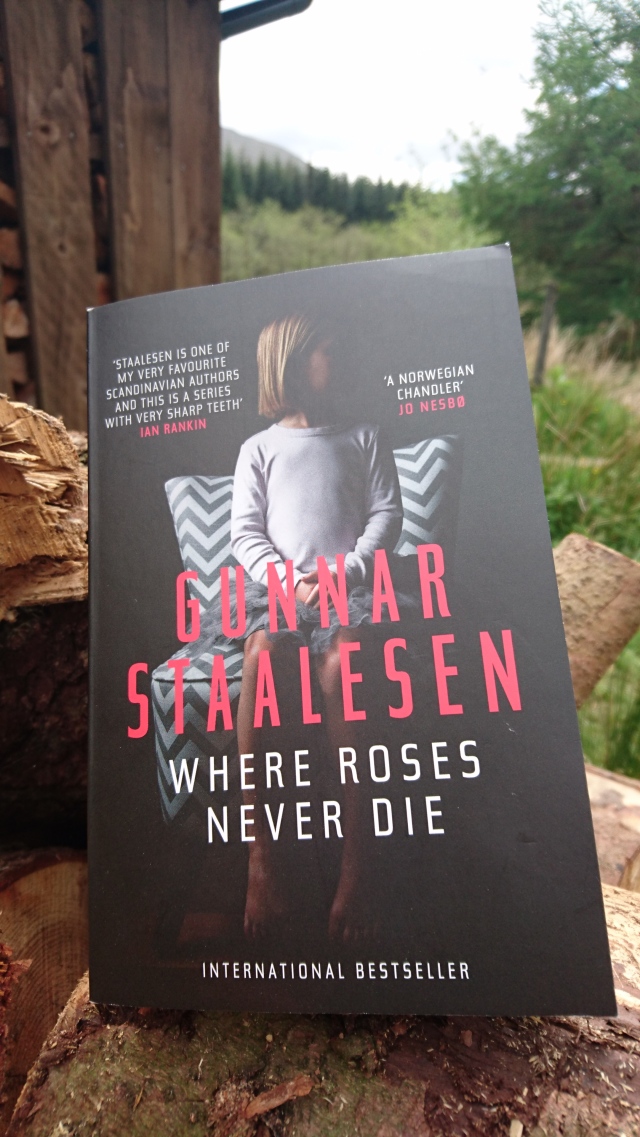 The current book Where Roses Never Die  is a great read.  The tale explores an unsolved missing child case from the past. The mother hires Varg to investigate further before the statute of limitations on the case expires completely. He discovers all kinds of secrets in the community the girl disappeared from and this uncovering of the past keeps the reader turning the pages.  The descriptions in the book are fabulous  such as ‘ behind  a tatty desk, so flimsy it would have had difficulty passing muster at the Salvation Army  charity shop, sat a big, burly man, looking like a fatted pig two weeks before Christmas and as endearing as an aching abscess on your backside.’ Descriptions which make the reader chuckle provide a humorous balance to the darker side of life that crime fiction explores and it is a talented writer that can work these laughs into a seriously dark tale which highlights the awful underbelly of human existence.

To sustain my Varg Veum habit I managed to get hold of a set of DVDs of Varg Veum films which add to what I have read and Gunnar Staalesen is making regular appearances in the UK at book festivals.  You can catch him at Edinburgh International Book Festival on Sunday 28 August 5.45pm til 6.45pm or in Aberdeen at the Booked! Festival   on the  29th August at 5.30pm.  Gunnar is an eloquent speaker with so much experience of crime fiction he is a joy to listen to so take the chance to go if you get it.  Where Roses Never Die is launched on the 30th of June 2016 and we wholeheartedly recommend it.  It is a satisfying, well written read which explores the human psyche and the different boundaries that people have. Let Varg Veum into your life, you know you want to!

Gunnar with a statue of Varg Bergen, Norway

You can read an interview we did with Gunnar here.

We have one new copy of the book to give away this January (2017). Reblog this piece /share from our Facebook page or retweet from our Twitter page to enter.

← Books in Bergen: A Review by Ewa Sherman
Huntress Moon by Alexandra Sokoloff →