Books in Bergen: A Review by Ewa Sherman

Having followed in Varg Veum’s footsteps previously, while reading Gunnar Staalesen’s   We Shall Inherit the Wind, I wanted to go back to Bergen. Luckily I found the best reason possible: the Literary Festival (De Litterære Festspill) organised by the Godfather of crime fiction himself Gunnar Staalesen between 26th and 28th May 2016.

Bergen is the second largest city on Norway’s south-western coast surrounded by beautiful mountains and fjords, such as the spectacular Sognefjord, the country’s longest and deepest. The UNESCO World Cultural Heritage site of Bryggen district, a former centre of the Hanseatic League dating back to 14th century, consists of the old wharf and its surrounding commercial buildings, and features vividly coloured wooden houses. Bryggen appears in the most recent outstanding book Where Roses Never Die published recently by Orenda Books.

Each year Bergen hosts one of Norway’s biggest cultural events, the Bergen International Festival, and undoubtedly for crime fiction readers the town symbolises the most recognised Norwegian PI Varg Veum, fighting for justice for those most vulnerable and critical of the rich and powerful.

The celebrated Bergen author Gunnar Staalesen- the Norwegian Chandler – said that his crime fiction holds a mirror up to Norwegian society, and created his own Bergen: with most of the same geographical characteristics, but totally fictional where social reality isn’t always as beautiful as its facade.

On the first evening of the De Litterære Festspill the ‘VargTime’ celebrated Varg Veum, with Gunnar Staalesen reading from his novels, then in conversation with Chris Tvedt, fellow Bergen writer. Jan Kåre Hystad Quartet played cool atmospheric jazz, melancholic and optimistic, and the guests loved every minute of it! Dim lights inside, gorgeous sunset after a hot day outside. No notorious Bergen rain! The event took place in the Femte i Andre Bar in the same building as Varg Veum’s office. But of course the office doesn’t exist. Yet every reader (is greeted by the life-size statue of the social worker turned private investigator outside the building. This actual place somehow feels unreal. The barman with red braces rules in the novels and in here: serves beer, champagne and super strong aquavit (Veum’s favourite drink), and afterwards invites everyone to eat fabulous cake. Both he and the infamous aquavit appear in the series.

At the age of eighteen Finn Antii Tuomainen (The Mine will be published by Orenda Books in October 2016) knew he had wanted to be a writer, being influenced by the American crime fiction and writers such as French author Alexander Dumas. He was 34 when his dream became a reality. The award-winning copywriter worked in advertising and said ‘crime story is my story, though all my books are different from each other. I just have stuff in my head and I like to write’. His third novel The Healer (2011) was awarded the prize for best Finnish detective fiction. Tuomainen was crowned The King of Helsinki Noir after the publication Dark As My Heart in 2013. The book translated by Lola Rogers was nominated for the prestigious Petrona Award this year. 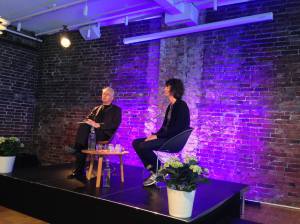 As was Karin Fossum’s The Drowned Boy (Carmen Zita og døden), translated into English by Kari Dickson, as always looking at death, motives and ordinary people with empathy and understanding, and away from Oslo’s metropolitan buzz. Karin Fossum, often referred to as the ‘Norwegian queen of crime’, began her literary career as a poet. She is author of the internationally successful series of crime novels featuring the headstrong but kind and slightly scruffy Inspector Konrad Sejer, first appearing in 1995. Her books have been translated into 25 languages, with several filmed for both cinema and television. Hellfire (Inspector Sejer 12) in English translation is out now. 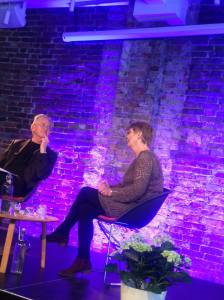 Uber-cool Håkan Nesser, one of Sweden’s most popular crime writers, has received numerous awards for his novels featuring Inspector Van Veeteren, a detective in the early novels and later the owner of an antique books shop, from a fictitious city called Maardam, said to be located in northern Europe. The books appeal to thousands of readers in Sweden, the Netherlands, Poland and Germany. Nesser is especially grateful to the Swedish writer Astrid Lindgren whose children’s books published in Germany had opened the doors for Scandinavian literature. His second successful series features Inspector Gunnar Barbarotti, a Swedish police officer of Italian descent, a more upbeat character than Van Veeteren. A Summer With Kim Novak shows that Nesser does melancholy beautifully, too.

For many years Scot Ian Rankin has been loved by Norwegian readers, and is especially known for his books about police detective John Rebus, also influenced by Raymond Chandler. His descriptions of Edinburgh have often been compared with Staalesen’s images of Bergen, and John Rebus is in the same tradition/school of investigating as Varg Veum.  Both authors keep meeting at various international literature festivals such as  the Edinburgh International Book Festival. Rankin describes himself as the ‘North Sea Writer’ rather than a UK writer as he feels that Scotland and Scandinavia share similar weather and a view of life: dark, brooding, often negative so Bloody Scotland will be perfect place to meet him in September. But he does appreciate walking around sunny, delightful Bergen!

The evening culminated in conversation with Maj Sjöwall, a Swedish writer and translator. From 1965-1975, together with her husband Per Wahlöö, she wrote a series of ten crime novels about Martin Beck, a police detective in Stockholm which are still read and have been adapted for films and crime shows, most famously the Swedish TV series Beck. The couple Sjöwall – Wahlöö regarded worldwide as ground-breaking crime writers are said to be the originators of what later has become known as ‘Nordic Noir’.  They also wrote novels separately. In 1971, the fourth of the Beck books, The Laughing Policeman (a translation of Den skrattande polisen, originally published in 1968) won an Edgar Award from the Mystery Writers of America for Best Novel and was adapted into the film of the same title starring Walter Matthau.  Sjöwall – Wahlöö books are simply timeless classics.

The audience at the Bergen International Festival loved the interviews, the sparkly Norwegian-Swedish chats between the Scandinavian authors, each respecting others’ work, the all-encompassing atmosphere of good books and excellent company.

The final event celebrated Bergen in literature, with the writers: Erling Gjelsvik, Stig Holmås, Ingri Lønnebotn, poet Erlend O. Nødtvedt, Tomas Espedal and of course Gunnar Staalesen whose Bergen trilogy, published between 1997 and 2000, extended his literary universe.The author himself regards these novels as his major work, ambitious and classic chronicles, with a canvas spanning the entire twentieth century history. Sadly there’s no English translation yet.

The conversation led by Jan H. Landro, and with music by Julian Berntzen who studied at Paul McCartney’s The Liverpool Institute for Performing Arts kept the audience engaged and enthralled, with the richness and variety of the styles and references!

Afterwards I read up on Ludvig Holberg (1684 – 1754), quoted many times; a writer, essayist, philosopher, historian and playwright born in Bergen during the time of the Dano-Norwegian double monarchy. He was influenced by Humanism, the Enlightenment and the Baroque, and is considered the founder of modern Danish and Norwegian literature. A statue in his honour stands proudly in the centre of town, by the boulevard named after him, and close to the Varg Veum sculpture. A crater on Mercury is named after Holberg. So what next for Bergen? Planet Varg? Veum Star?

← ‘Cause When It’s All For One, It’s One For All*
*Giveaway* Where Roses Never Die – An addiction to crime fiction  →