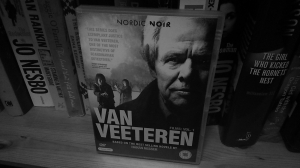 Van Veeteren, Films:Vol.1 – This Swedish series is based on the books by Hakan Nesser, one of Sweden’s best selling crime writers. We saw him being interviewed by Barry Forshaw at Nordicana this year alongside Arne Dahl. There was a great atmosphere at that talk as all three people really know their subjects and had a good rapport.

I watched ‘Borkmann’s Point’ tonight, the first of three films on the disc knowing nothing about the series except that the location of the show was fictional. It struck me as a quiet crime show of the traditional police procedural type.

The colours were muted, the music mainly atmospheric and classical. I loved the colour of his car, a particular shade of off white that I associate with Scandinavian design. The locations looked real and definitely weren’t glamorised. Strangely the look of the show was almost exactly what I imagined when I read the first Sjowall/Wahloo book ‘Roseana’ which was published in 1965.
(you can find a short review of that book here: https://nordicnoirblog.wordpress.com/2013/10/18/roseanna-by-maj-sjowall-per-wahloo/ )

The main detective after whom the show is named is a bit of a mix between Wallander and Martin Beck. Indeed this particular episode definitely had a strong male theme running through it. Not any particularly challenging female roles in this episode, in fact mainly stereotypes; the prostitute, the wife, the supporting female detective. The themes of ageing, family and time passing were also strong. The pace of the story was good, not too fast and it was quite a relaxing watch. My heart wasn’t thumping and I wasn’t on the edge of my seat, but the character development was solid and the relationships Van Veeteren has in his life seemed realistic and honest enough to keep me watching and maybe buy one of the novels in the future.